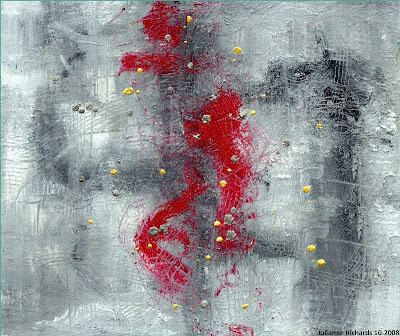 I pulled out a canvas from 2006-one that already had loads of paint, one that- other than thick and interesting with texture, was just waiting for the right "new idea."
Here it is.
I did not even use Gesso-as I laid a heavy layer of white, a little black, silver, blue interference
(Golden's Fluid acrylics),
and some iridescent pearl (also Golden). Without even mixing much, I just used my wide brush loaded with the paint and laid a thick layer-Then made texture with with the deep mix, while leaving some black to paint "wet on wet" the few (now gray) lines before stopping to let it dry and take time to observe it...
Next came Crimson half thrown onto the piece-and droplets of fluid iridescent gold and coarse silver straight from the bottle...
Finished with UV protective gloss varnish. Canvas is 22"x28" .75" depth.
COA from EBsq.
$300 (includes shipping in US)
If Interested email me HERE
or go directly to my GALLERY 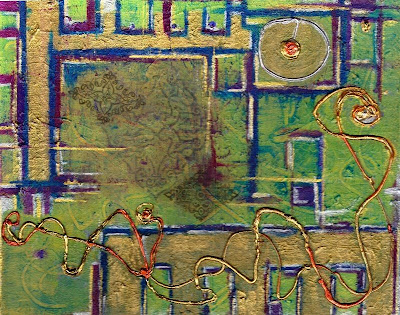 Posted by colorspeaker at 11:10 PM 3 comments: Links to this post

The Colorist: Decisiveness - Drawing the Line

The Colorist: Decisiveness - Drawing the Line

Posted by colorspeaker at 2:24 PM No comments: Links to this post

Casey Klahn, the talented pastelist and artist, is doing a series of posts that are as interesting as they are informative. He has a whole section on Matisse and Integrity-to this week on "Characteristics and Goals." Well worth reading!!
Here is a small part from today's post:
by Casey Klahn

In the post, Characteristics & Goals, we began a path of exploring some traits that it would behoove the fine artist to acquire. See the traits posts here.

The artist that I aspire to be has:

Matisse said something to the order of, "Make your lines decisive!" Unfortunately I have lost the attribution to this quote, but our great Modernist is known for his superb rendering of the simple, graceful and purposeful line.

Posted by colorspeaker at 2:11 PM No comments: Links to this post 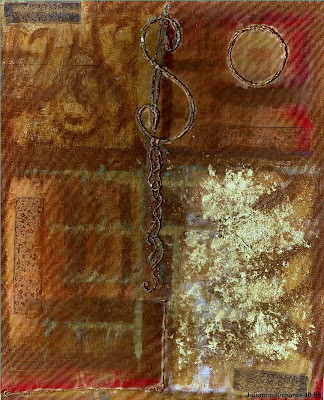 Finally!
This the third painting in my "Textural Abstract" series. It is acrylic paint and mediums on 24" x .75" x30" canvas.
Earth tones mixed with Gold-leaf and textured images painted with acrylic interference green, on layers of glazes (Golden Acrylics) with gold, burnt umber and sienna...This is a multi-layered and mixed media piece that may still be "a work in progress."
I have several more unfinished pieces, and with that, it is back to the easel!
$250.00 (shipping included)
If interested-click HERE
Or you may email me directly: HERE 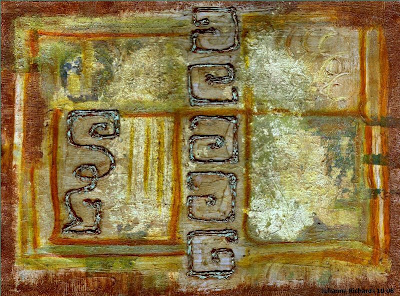 This is the second painting in a series of "Textural Abstracts." It is on quality heavy (300 lbs) paper 15"x20." From gold-leaf, acrylic interference green and gold paint, to heavy gloss and matte gels, this is earth tones mixed with shimmers of colors and peaks of texture throughout the painting. The edges are burnt umber and sienna with a grid-"comb-like" texture-that goes around the entire piece.
COA from Ebsq.
If interested click: HERE

Posted by colorspeaker at 2:29 PM 3 comments: Links to this post 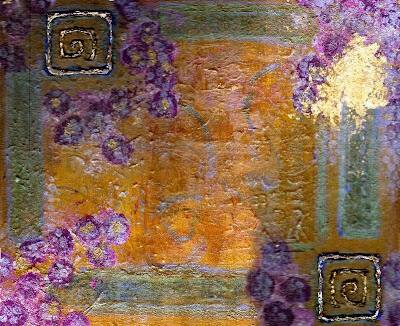 This is the first post in several weeks for me...I have spent this time working with mediums-heavy gloss, modeling paste, matte medium, and more. It was quite a bit more of a challenge than I even knew...I have done many "pieces," but I wouldn't call them paintings-yet.
Golden Acrylics sent me some samples to try of their new "Open" acrylic line of paint, and I will have comments soon.
This piece is a very different style for me-it is on canvas 16"x20" with impasto textural effects that the monitor isn't really able to completely show.
I will keep working on all the new artwork, and hopefully they will be posted soon.

Posted by colorspeaker at 2:23 AM 4 comments: Links to this post 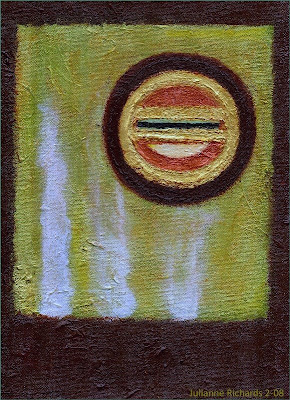 This makes # 4-
Acrylic on canvas 9"x12" Acrylic paint by Golden and Utrecht. Finished with a UV protective gloss varnish.
ONLY $ 150 (shipping included!!!)
If interested you may email me HERE
Or go to My on-line gallery (secure checkout) at YESSY
Posted by colorspeaker at 7:22 AM 2 comments: Links to this post 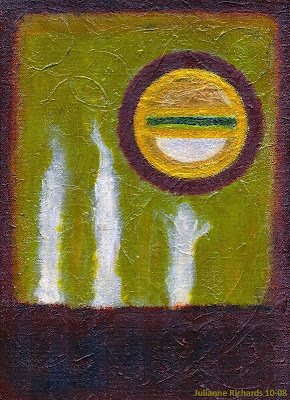 Acrylic on canvas 9"x12"
Finshed w/ UV protective gloss varnish.
All four sides painted, signed on front and
back.
COA by EBSQ.
Only $150.00 (plus shipping)
Email me Or -
go to Yessy
Posted by colorspeaker at 6:39 AM 2 comments: Links to this post Here is a list of some of my personal favorite links. In addition, I am listed in these as well...

NOW Available!!! Secure Purchasing of my Artwork via PayPal-right here!

For Email Marketing you can trust

Linkism Web Directory - Information and resources for artists and the arts industry. Includes services and products for art enthusiasts and collectors.

All Artwork Certified of Authenticity by:

Who links to me?